Home
Card games
6 Most Popular Card Games in the World 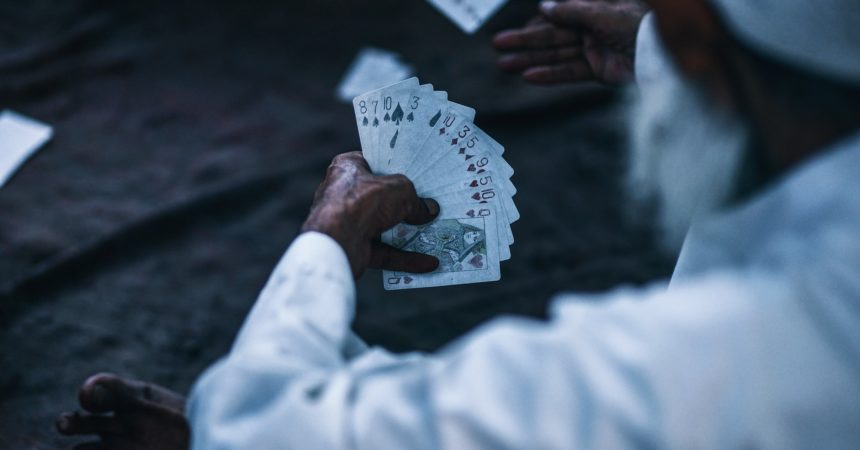 Rules may also vary from one group of people to the other and you could also have the surprise of not finding two people who know the same rules for a simple game. Even so, there are some games whose popularity is so great that everybody knows how to play them. Ever wondered what are the games you could play with other people anywhere else in the world?

6 of the Most Popular Card Games in the World

This comes as no surprise to anyone. Poker is, by definition, THE most popular card game in the world. “To blame” for this is the excessive promotion of the game as the most exciting card game anywhere. It is played in casinos and in private homes. Some people make a living as professional poker players and they do it in a very glamorous way. Also, there is an aura around good poker players because they are said to be aces at controlling their emotions, getting others to believe their bluffs, and reading other player’s reactions. And it’s everywhere. In paintings, in cartoons, in books, and in movies. People see it everywhere and they want to join in the excitement. 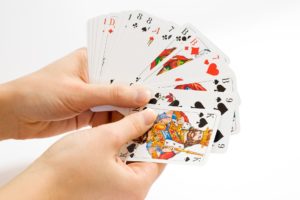 This is a popular game because it can be played with cards AND with special plastic slabs. The rules of the game are the same and you may come across people who know how to play it with cards or with special slates. It is fun, exciting and inclusive. The great part about it is that a match does not last too long for people to get bored or tired. So, finding other three people with a couple of hours to waste and who know how to play either type of game, might not be that difficult.

This is too easy. Even if you come across people who do not know how to play it, explaining the rules takes so little that you can teach them to another person in a matter of seconds. Even children can learn the game with ease.

When the whole deck is divided in two, every player needs to agree to play the cards from the top of from the bottom, and when the highest card wins, things are more than clear. You don’t even need to think about your next move and you don’t have to have any type of skills. This game is all about chance and the sequence of cards. The person who collects the whole deck is the winner.

As mentioned above, the great thing about War is that you can easily play it with children. The rules are easy to explain, every win makes them happy and the language of numbers is universal. If you ever need a child to sit still for a while, you can become a hero for all grown-ups and give him something to do. 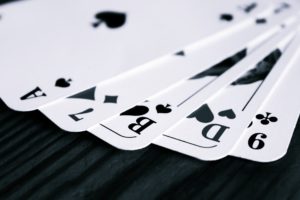 We are entering a more complex area of card games. Whist is a game played with trump cards, where

you need to calculate how many hands you will win in advance. The great thing about it is that understanding this game allows you to play other games with trump cards, like Rents, for example. True, this game is more demanding, you need to remember some rules, to pay attention to the game and to make quick decisions. If you are playing with strangers, this game is a great ice breaker, and, if you have a lot of time on your hands, you can even embark in more complicated games.

It’s more fun than it sounds and you can get many people to join in the game. A common language will be necessary, though, as every player needs to call the cards he allegedly discards and the others need to understand their value and sign, before they decide whether to call bullshit or not. If language is not a barrier, you will see that a lot of people know the rules of the games.

Another great thing about this game is that it is not the kind of game you need to concentrate on, and it can be played by larger numbers of people. Usually, groups of people playing bullshit will get rowdy. But it’s always great fun and a nice way to get to now other people. 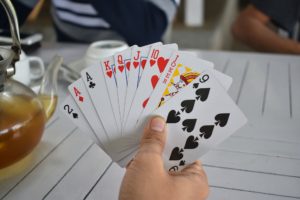 If you go to any casino in the world, you will get the chance to play Blackjack. This game built around the goal of reaching number 21 is very short and exciting. This is one of the things people feel comfortable playing in impressive casino settings because it is easier to understand than others.

You play against the house, a few cards are already laid down, and then it’s all up to your capacity to add the numbers and to calculate your probability of getting the right value for the last card. It’s a long shot, but the fact that it ends quickly makes it short and exciting. What is more, at a Blackjack table you can make specific game signs that mean “deal me another card” or “stop” with. Everybody looks cool at the Blackjack table.

How does this article help? Well, should you travel abroad and feel the need to play some cards with anyone, you might know exactly what game to suggest and be sure your invitation gets accepted from the very beginning.

Of course, the chance of coming across people who know the game but who do not have a strong grip on the rules is high. But they will still understand the type of game you are suggesting. So, go ahead! Dare to travel and play! 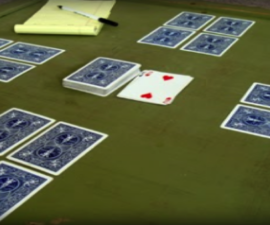